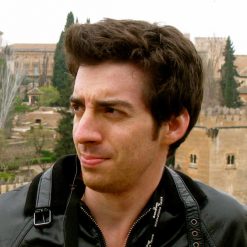 If I had been in the position of most Americans, I would have been screwed and would have had to choose between bankruptcy and my health.

Steve Venick has had a degenerative, genetic, arthritic condition since he was 12 years old. By the time he was 20, his health had deteriorated to the point where despite being 6 feet tall, he weighed only 130 pounds. Physical therapy was not helping.

Luckily, his doctors finally arrived at a diagnosis of Ankylosing Spondylitis (AS). AS had long been more or less untreatable, but thankfully there was a new treatment that had recently become available and had very high success rates. Steve started treatment with Remicade, a biologic drug that has to be delivered by IV every 8 weeks, in June 2005. Within two days, his pain was almost gone and within several months, he had gained 30 pounds and was completely pain-free.

Unfortunately, Remicade, like the other biologics, is extremely expensive, with each infusion costing between $6,000 and $11,000, depending on the provider. Because this was before the ACA, his health insurance was able to deny coverage for Remicade because Steve had a pre-existing condition. Steve’s family went through the appeals process and after a ton of back and forth, the insurance company still denied coverage. Steve remembers his father spreading out a huge pile of insurance documentation, trying to find the reason their claims were being denied. Finally, in a last-ditch effort, Steve’s father sent his health insurance company a letter with the letterhead for his law practice, essentially threatening legal action. After that, the appeal went through.

Steve acknowledges that most people put in his situation would not have been able to appeal, and that he was lucky to have his attorney father on his side. “If I had been in the position of most Americans, I would have been screwed and would have had to choose between bankruptcy and my health.” Without the Remicade treatments, Steve would likely eventually have been unable to walk and would have had to go on disability.

Today, Steve feels more freedom because he knows that he cannot be denied coverage because of his pre-existing condition, and that he will never be trapped into working a job at all costs just to keep his insurance.

Steve is currently on COBRA insurance after leaving his last position. He has used exchange insurance before and was satisfied with the coverage.

“Thanks to the ACA, I no longer have to worry about my Remicade not being covered because I have a pre-existing condition.”