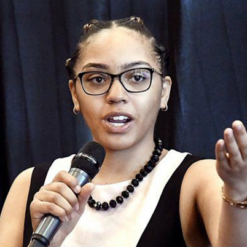 “I have to reach a $3500 deductible but I’m diabetic every single day. This is something that I need regardless of a deductible or regardless of my income, and people shouldn’t have to choose between paying their bills and going to the pharmacy.”

Sa’Ra was diagnosed with Type 1 diabetes when she was five years old and remembers her mother struggling to afford medicine. The most disturbing experiences occurred several years ago, after enrolling in college. Up until that point she was able to receive samples of insulin from her pediatrician until she was told that she had “aged out” of pediatric care and would no longer qualify to receive the samples. While at school, she attempted to enroll in Medicaid more than once but was denied each time, with little understanding as to why. Eventually, Sa’Ra decided to quit college and move back home because she was too sick from rationing her medicine and food to survive. Once she was home, her sister, who also has Type 1 diabetes, began to share her medication with Sa’Ra. It was a dangerous move as her sister landed in the hospital where she nearly went into a diabetic coma.

Sa’Ra now has employer-sponsored health insurance but it’s still a struggle because she has to meet a $3,500 annual deductible. “I have to reach a $3500 deductible but I’m diabetic every single day,” she says. Moreover, even if she does reach the deductible, she cannot access the insulin her body responds to best because her insurance company no longer covers it. Other times she cannot get her insulin because the pharmacy doesn’t have any. Sa’Ra now depends on insulin donations that receives in the mail from people who have heard about her struggle. And sometimes she’s able to get samples from her doctor. It’s not uncommon for her to receive expired donor medication but says she feels she has no choice but to take it. “This is something that I need regardless of a deductible or regardless of my income, and people shouldn’t have to choose between paying their bills and going to the pharmacy.