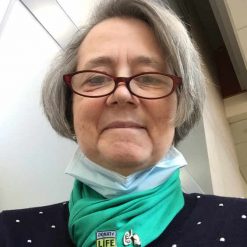 It was a sad day when I had to apply.

Catherine says that she cries every time she sees a story about privatizing Medicare. She is a disabled lung transplant recipient who battles multiple medical conditions and without Medicare, she would die.

Before she became sick, Catherine worked as a secretary. She says that her doctors tried to convince her to apply for disability two years before she finally did, “it was a sad day when I had to apply.” Her profession meant that she never had much in the way of savings. In order to cut down on expenses, she sold her home and jointly purchased a house with her parents so they could all live together.

Catherine was already on Medicare and disability when her lungs began to fail. She says that within three months of going to the doctor with a cough that wouldn’t go away, her doctors said that she wouldn’t live to see the end of the year without a lung transplant. Catherine was eventually diagnosed with idiopathic bronchiolitis obliterans, a condition that mimics lung rejection.

Her condition was so dire that doctors began preparing her to die. Hospice was brought in, there were discussions of palliative care. Catherine says she was preparing herself to not make it out alive.

She was able to receive a transplant in November 2014, a year after her cough began. Because lung transplants have a high risk of complications, she needs to be constantly monitored by doctors. She is struggling from the side effects of her medications and another undiagnosed condition. She says that it was like, “trading one disease for another.”

Catherine and her parents (86 and 89, and also Medicare recipients) live together, pooling their social security in order to get by. They live an extremely frugal life, noting that some things, like going out to eat with friends are an extravagance that they can’t afford. This year, she chose not to bake Christmas cookies, because she knows how the cost can add up. Her brothers help when they can, but they aren’t in a position to financially support everyone, nor does Catherine believe they should.

Privatizing Medicare, or providing vouchers is terrifying for Catherine because she knows she won’t be able to afford her care. She would run out of money very soon, and without access to treatment or drugs, she would very likely face set-backs in her road to recovery.