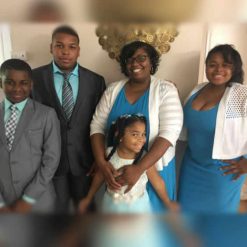 This insurance has been great for me. You don’t really realize the value in it until you have it. My family and my clients depend on me, so I can’t get sick.

Stephanie Burton is an attorney and a single mother of four. To begin law school, she had to quit her job and she subsequently lost her insurance coverage. While her kids were covered by the state, Stephanie did not qualify for coverage and independent plans were upwards of $700/month. Stephanie was covered during her 2009 pregnancy, but was booted off the plan immediately after her child was born.

“I looked at insurance policies, but I couldn’t afford them even if I had a good job,” she said. In 2012, Stephanie was pregnant again, but put off the additional testing to qualify her for Medicaid during her pregnancy. Ten weeks in, she went to the ER while having a miscarriage, “It was physically and emotionally painful,” Stephanie said. She left the hospital with $10,000 in bills. “I still get bills from that,” Stephanie said. “I didn’t even get to take a baby home for that $10,000.”

When the exchanged opened up, Stephanie began looking at her coverage options. She began logging on daily, trying to sign up for coverage, each day getting a little further in the process than the day before. Finally she was able to choose her plan. Stephanie was looking specifically for a plan with an affordable co-pay. “I wanted continued coverage,” Stephanie said. “Even if the deductible was high, I did not want to have to choose not to go to the doctor because I can’t afford the co-pay.”

She chose a Blue Select Silver plan for $70.97/month after her subsidies were added. Her plan has a $600 deductible, where she pays everything until she hits the deductible and then nothing more. Her children were able to continue their coverage through Medicaid. “This insurance has been great for me. You don’t really realize the value in it until you have it. My family and my clients depend on me, so I can’t get sick.”