Why States Should Suspend Medicaid for People During Incarceration

With a majority of states expanding Medicaid, many more people stand to gain health coverage, including those recently released from jail or prison. States are re-evaluating their policies regarding Medicaid for incarcerated residents.

We’ve taken a closer look at what states have accomplished so far to get a better idea of how this has played out across states. We found that 34 states and the District of Columbia now have some form of policy to suspend Medicaid for people in prison or jail. Here, we explain why more states should adopt this policy.

We all have a stake in ensuring that people recently released from incarceration can get health coverage without jumping through administrative hoops or waiting several months to get back into the health care system. Access to health care has proven crucial to helping people avoid returning to jail or prison after release.

People re-entering communities following incarceration have significant health care needs, yet many are uninsured, and therefore go without needed care. The expansion of Medicaid under the Affordable Care Act (ACA) presents states with new options for extending health coverage to this population. Those who could benefit include people on parole or probation, serving short terms in county or state jails, and serving longer sentences in state or federal prisons.

States can choose to terminate or suspend Medicaid during incarceration

People in the criminal justice system are not able to use Medicaid while incarcerated (unless it’s for inpatient services). However, as our new 50-state map shows, when an individual leaves incarceration, the process for handling his or her Medicaid varies widely by state.

States have two options when someone is incarcerated:

Termination of coverage can often lead to gaps or lapses in health care coverage. Suspension of Medicaid gives those re-entering their community a more seamless path to coverage. Not only is this easier on the individual, but it is also a much more efficient process for the state Medicaid agency. Plus, if the state suspends Medicaid, its Medicaid agency can reimburse jails and prisons for inpatient hospital services that people receive during their incarceration. 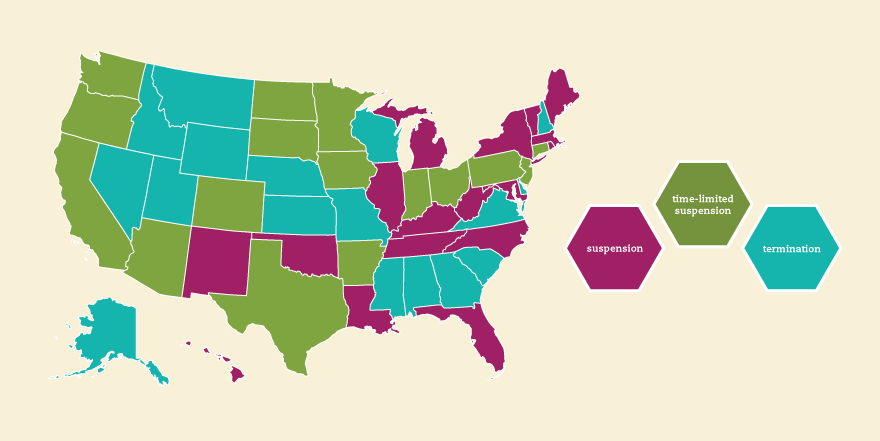 Our new 50-state map shows which states suspend and which states terminate Medicaid for people entering jail or prison.

Changing a state’s Medicaid suspension policy is a multistep process

While the Centers for Medicare and Medicaid Services (CMS) recommends that states suspend Medicaid, states ultimately retain flexibility regarding how they make that transition.

To suspend Medicaid during incarceration, a state must take multiple steps to implement the policy change. The processes differ by state, and it’s important to know the steps required in your state when beginning to engage in this work.

Of the 34 states that now have some form of suspension in place, some states passed legislation to do so. These include California, Florida, and New Mexico. Other states, such as New Jersey and North Carolina, used an administrative process to switch policies.

Why now? The option to suspend Medicaid has existed for some time. Many states didn’t adopt this option before, however, because so few people were eligible for coverage before the ACA’s expansion of Medicaid.

Making the case to suspend Medicaid instead of terminating coverage

When working with these partners, focus on these key points that are most likely to resonate with policymakers:

Policies around this issue are changing fast, and we’re eager to see more states adopt the policy change to suspend Medicaid for incarcerated individuals. If you’d like guidance about how to get involved in this work, email us at assisters@FamiliesUSA.org.

Listen to a webinar Families USA hosted on best practices for outreach and enrollment for incarcerated residents.