Under House Bill Consumers Will Pay More For Less

There are countless sobering findings in the Congressional Budget Office’s (CBO) assessment of the House GOP repeal bill, most importantly that the bill would lead to 24 million people losing health insurance. In addition to taking away coverage from millions of people, CBO also found that this bill would move the remaining insured into skimpier coverage, with much higher cost-sharing than they have today. This is in part because the bill would completely eliminate the Affordable Care Act’s financial assistance that helps people afford their deductibles and copays—known as “cost-sharing”—and would allow insurers to sell plans that force consumers to pay even higher deductibles and co-pays than they do now (“increased cost-sharing”). It also is due in part to the fact that this bill would drastically cut financial assistance with premiums, leaving many people only able to afford cheaper plans that come with much higher out-of-pocket costs.

To be specific, CBO estimates that under the GOP repeal plan, by 2026, the average actuarial value of plans purchased on the marketplace would be only 65 percent. Actuarial value may seem like a complicated term, but it has very real importance. In its simplest explanation, actuarial value is the measure of how generous a plan is. The lower a plan’s actuarial value, the higher it’s cost-sharing—or cost to consumers—like deductibles, copays and coinsurance.

Today, the vast majority of people with marketplace coverage—8.5 million people—are enrolled in silver plans. Of those, 7 million also get financial assistance to further reduce cost-sharing in their silver plan. While there are numerous ways that insurers could design a health plan with a 65 percent actuarial value, it is a foregone conclusion that such a plan would have significantly higher out-of-pocket costs than the coverage that these 8.5 million people have today. This is simply because silver plans have a higher actuarial value. When you add in the financial assistance most of these people receive to further reduce cost-sharing in a silver plan (and, in effect, increase their plan’s actuarial value), the difference between a 65 percent actuarial value plan and the level of coverage people have today only grows. 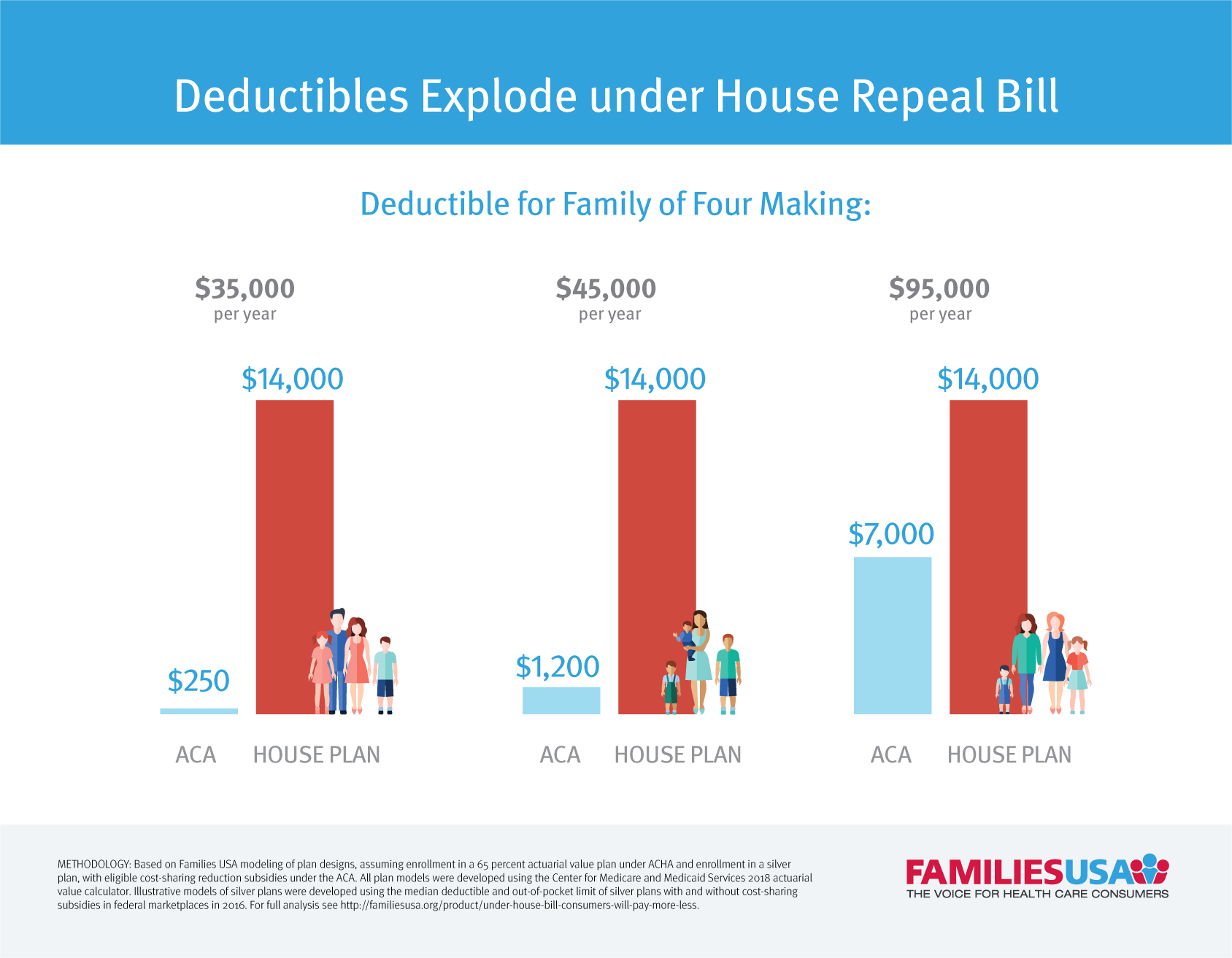 Exactly how much would cost-sharing for consumers be in a plan with a 65 percent actuarial value, and how much higher would it be compared to the coverage people have under the Affordable Care Act? Families USA modeled three hypothetical plans designs that have a 65 percent actuarial value as an illustration of how high of cost-sharing could be for consumers in such plans. We modeled:

The findings are stark: A 65 percent actuarial value plan—the kind envisioned in the House GOP repeal bill—that only covers doctor’s visits before the deductible could easily have a $7,000 deductible. This means people wouldn’t get any help paying for hospital care, prescription drugs, maternity care, or any other services outside of their doctor’s visits until they paid $7,000 out-of-pocket.

*All plan designs were modeled using the Centers for Medicare and Medicaid Services 2018 actuarial value calculator. Deductibles listed are for an individual and would be doubled for family level coverage. Under modeled plans, care covered before the deductible is covered with no cost-sharing. Doctor’s visits covered before the deductible include primary care, mental health care, and specialty care office visits.

Using these modeled silver plans, we found that switching to a 65 percent actuarial value plan with a $7,000 deductible would mean a huge increase in out-of-pocket costs for people.

In total, these examples paint a picture of the drastic increase in health care costs people could face under the House repeal bill. In addition to many lower income people and older adults having to pay higher premiums for coverage- everyone will also being getting far less coverage, with much higher cost-sharing. There are no winners under this scenario.

How House Repeal Bill Could Increase Cost-sharing for Marketplace Enrollees

*All plan designs were modeled using the Centers for Medicare and Medicaid Services 2018 actuarial value calculator. Illustrative models of silver plans were developed using the median deductible and out-of-pocket limit of silver plans with and without cost-sharing subsidies in federal marketplaces in 2016, based on Commonwealth Fund reported data. Deductibles listed are for an individual and would be doubled for family level coverage. Under modeled plans, care covered before the deductible is covered with no cost-sharing. Doctor’s visits covered before the deductible include primary care, mental health care, and specialty care office visits.