Today, House Republicans are weighing a new amendment to the American Health Care Act (AHCA) in their latest attempt to secure the needed votes to bring the bill to the House floor.

Reports on the negotiations suggest that the amendment, drafted by two key Republican holdouts—Reps. Frank Upton and Billy Long—would add a paltry $8 billion over five years to the funds available in AHCA to offset premium increases and to make up for the bill’s elimination of financial assistance with cost-sharing.

The additional funding is being included in the name of providing financial support for people with pre-existing conditions who will see drastically higher premiums under this plan.

The Upton-Long amendment is not even a fig leaf: It is a laughably inadequate attempt to ameliorate damage done by the provisions of the AHCA that would drastically undermine the ACA’s guarantee of affordable comprehensive coverage for people with pre-existing conditions. 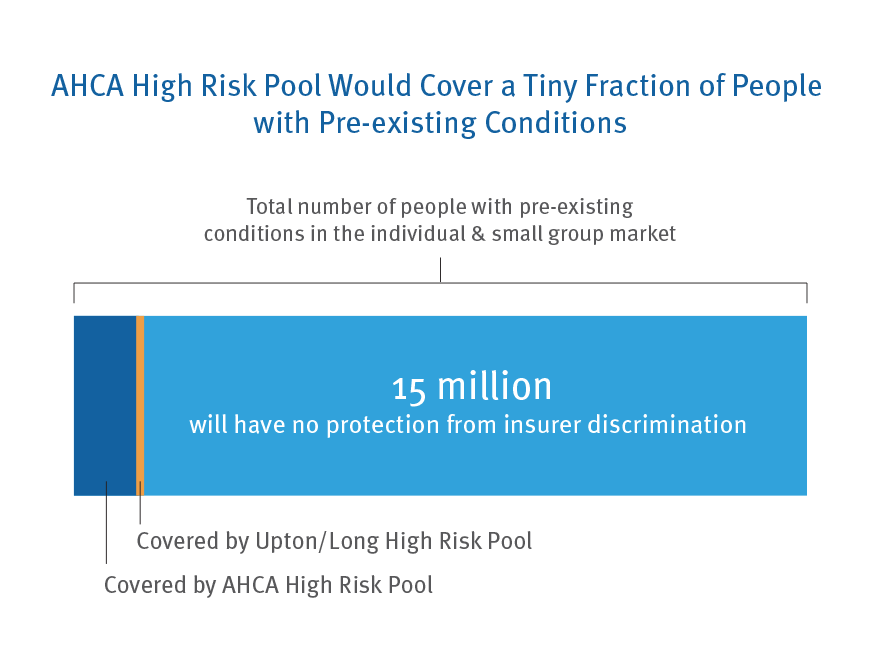 House Republicans have claimed that the $130 billion in funds (or $13 billion per year for 10 years) included in the most recent published version of the bill would be sufficient to protect these individuals from higher premiums—a claim that has been roundly disputed by experts. This fund includes $100 billion for a Patient and State Stability Fund, $15 billion for a federal “invisible risk-sharing” program, and $15 billion earmarked for specific health needs/conditions. The Upton-Long amendment adds only $8 billion to this fund, bringing the total funds available per year to $14.6 billion—an amount not nearly sufficient to ameliorate the damage this bill will cause in access to affordable coverage for the millions of individuals with pre-existing conditions.

The purpose of the Fund is amorphous. Importantly, the funds available in the bill could be used by states for multiple different purposes and states are not obligated to put any of this funding toward offsetting increases in premiums for people with pre-existing conditions. Republicans continue to claim that an unspecified portion is intended to protect other populations who will be hurt by cuts to financial assistance already in the bill, including older adults and lower-income people losing help with cost-sharing.

According to a Families USA analysis, even if all funds were directed to high-risk pools, the funds allocated under the Upton-Long amendment could cover only 76,000 individualswith pre-existing conditions per year. If the entirety of the state fund (as increased by the amendment) was used to cover people with high-cost pre-existing conditions (in the top 5 percent of costs for individuals purchasing coverage), it would only go far enough as to cover 693,000 individuals. This would still leave at least 6.4 million, and as many as 15 million, people with pre-existing conditions who get coverage through the individual and small group markets without any additional financial support to help protect them from increases in premiums and benefit cuts.

As our analysis makes clear, this new amendment would not provide nearly enough in funding to ensure that individuals with pre-existing conditions would have access to affordable, comprehensive coverage under the AHCA. The small additional funding provided under the Upton/Long amendment still leaves millions with no affordable coverage options. Furthermore, these changes do nothing to reduce the harm caused by the other provisions of the AHCA that would:

Analysis of the number of people with high-cost pre-existing conditions who would be covered by high-risk pools through AHCA funding is based on a Center on American Progress (CAP) analysis that estimated that 1.5 million people in the individual and small group markets have severe enough health conditions that they previously would have been covered through a high-risk pool and that providing this population high-risk pool coverage would require $21,080 in federal funding per person per year.