When Kentucky expanded Medicaid on January 1, 2014, the state made a commitment to improving the health, quality of life, and long-term wellness of its residents. Early data suggest that Medicaid expansion is already having a positive impact: Since 2013, Kentucky has seen a 37 percent increase in the use of preventive care services that residents need to stay healthy and avoid chronic illness.

Kentucky has continually struggled with some of the worst health outcomes in the nation. In 2013, the state ranked 50 in cancer deaths and 45 in premature death. Additionally, Kentucky ranked 41 in annual dental visits and 45 in overall health status.

Kentucky’s decision to accept federal funds to extend Medicaid to cover all adults under 138 percent of the federal poverty level (about $16,000 per year for a single person), represents a significant step toward trying to change these statistics. Now more than 330,000 residents have access to affordable health insurance. Medicaid also covers regular check-ups, cancer screenings, and other essential preventive care at very low or no cost to the patient.

Recently released data from the Kentucky Cabinet for Health and Family Services show an uptick in screenings and services compared to 2013:

Medicaid expansion and the access to preventive care services it allows can improve health outcomes for Kentucky residents. When people take advantage of preventive care screenings and check-ups, medical providers can identify health issues before they become serious and improve the success rates of treatment. 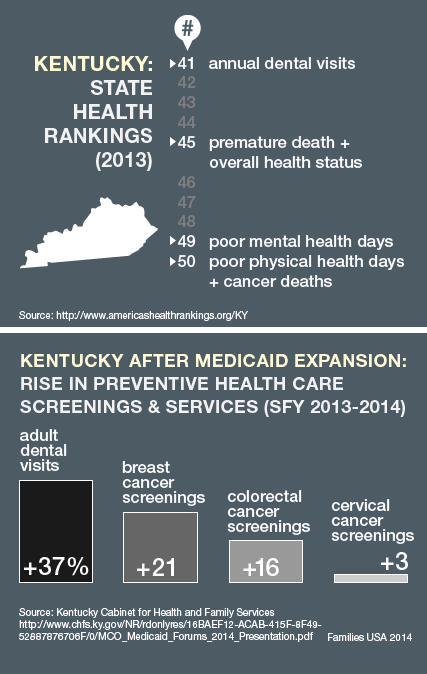 Kentucky’s economy suffers because of the poor health of its residents. Kentucky ranks 49th in poor mental health days and 50th in poor physical health days. These rankings refer to the frequency of days when an individual has reported feeling limited in his or her work activities due to poor mental or physical health. Poor mental and physical health has a significant impact on the nation’s workforce, reportedly costing the American economy $576 billion a year. Chronic conditions, such as diabetes, heart disease, and depression cause much of this decreased productivity. Preventive care can help mitigate the economic consequences of these illnesses by keeping people healthy and catching and treating chronic conditions before they affect work productivity.

Without adequate health insurance, preventive care is not accessible to low-income people with high rates of chronic disease—a population traditionally helped most by the Medicaid program.   Medicaid expansion allows these low-income Americans to access this important, life-changing care, and helps them avoid seeking treatment only when a condition is advanced, expensive, and adversely affecting their ability to work.

Kentucky’s decision to expand Medicaid will undoubtedly reap the state many benefits, from a drop in the uninsured rate to an increase in economic activity. But the access to critical preventive care services may be the benefit that gives Kentucky a much-needed boost in the health status of its residents.