In early May, Republicans in the House of Representatives rushed through their repeal bill, called the American Health Care Act (AHCA), without taking the usual step of waiting for the CBO report to fully understand the human impact before voting.

About two weeks after this vote, the nonpartisan Congressional Budget Office (CBO) confirmed that the House Republican bill to repeal the Affordable Care Act would roll back the clock on years of progress toward health care for all and devastate the American health care system.

The CBO’s findings make it all too clear why the House was in such a hurry to act: The AHCA would cause tens of millions to lose coverage, gut the Medicaid program, substantially increase premiums and out-of-pocket costs for lower-income people, older adults, and people with high health care needs, and undermine core protections for people with pre-existing conditions. And it would do all this while giving over $660 billion in tax breaks to corporations and the wealthy.

Problem 1: Tens of millions of people would lose coverage

The CBO estimates that under the AHCA 23 million more people would be uninsured by 2026 – a rate that is 82% higher than under current law. The AHCA caps and cuts the Medicaid program and eliminates the Medicaid expansion. These changes would hit the most vulnerable people in America hardest: 14 million people would lose vital Medicaid coverage, including millions of children, veterans, the disabled, and the elderly.

The CBO also notes that some of these uninsured would be sold policies on the newly structured marketplaces that would be so inadequate that they don’t meet the CBO’s definition of insurance – policies “that would not cover major medical risks.”

The CBO is describing a return to the pre-Affordable Care Act days of routine and widespread marketing of individual policies to unsuspecting consumers that are so inadequate that they render them effectively uninsured.

This finding further suggests that premium tax credits would be so inadequate for some people that, even with this assistance, the only insurance they could afford would be woefully inadequate to meet their health care needs, much less protect them from financial risk.

This return to insurers marketing plans that don’t cover major medical risks could have disastrous effects on state markets and increase premiums for everyone with truly adequate coverage by luring younger and healthier people away from comprehensive plans.

The ACA established key protections to help ensure that as people age and face more serious health care needs, they are still guaranteed affordable coverage. The House repeal bill completely undoes these protections. Under the House bill, premiums would skyrocket for people who need affordable health care the most – lower-income people, older adults, and people with pre-existing conditions. For example, 64 year olds making $26,500 would see their premiums increase 800% or $14,400 a year. In total, premiums would consume 61% of their income under AHCA (compared to only 6 percent of their income under the ACA). 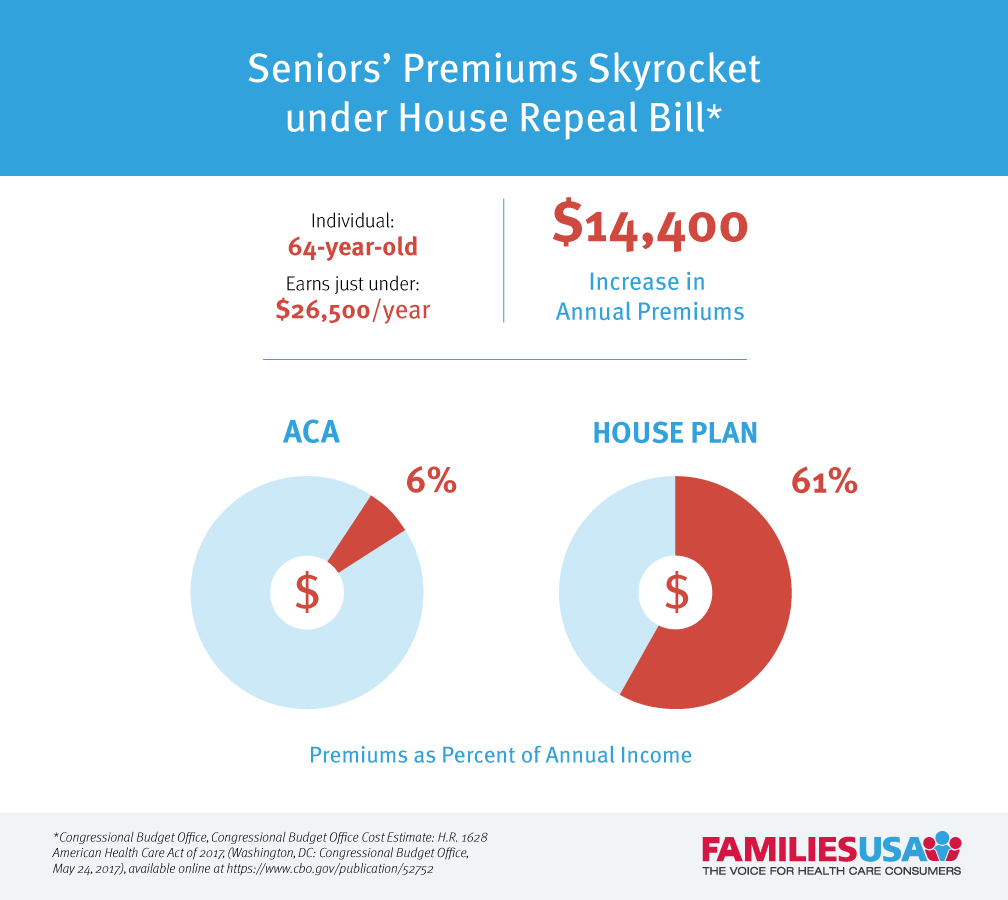 People with pre-existing conditions could also face substantially higher premiums under the AHCA in states that waive core consumer protections. The CBO estimates that these individuals could face premium increases so substantial that they might not be able to purchase coverage at all.

Problem 3: Half of the country would live in states that allow insurers to deny affordable, comprehensive coverage to people with pre-existing conditions

The final version of the AHCA included an amendment introduced by Rep. MacArthur (R-NJ) that would allow states to waive protections for people with pre-existing conditions – eroding requirements that health plans cover a set of 10 essential health benefits (EHB), and allowing insures to once again charge people with pre-existing conditions higher premiums for coverage. The CBO estimates that if the AHCA were enacted, half of all individuals would live in states where they would lose guaranteed protections against insurer discrimination.

One in three people would live in states that narrow the scope of essential health benefits, meaning that plans would no longer be required to cover critical services like maternity care, prescription drugs, and mental health/substance use services. These states may also allow insures to charge higher premiums to people with pre-existing conditions in narrow circumstances. CBO estimates that people living in these states that used these services “would experience substantial increases in out-of-pocket spending on health care or would choose to forgo the services.”

Problem 4: A massive cut to Medicaid coverage for seniors, children and other of our most vulnerable citizens

The CBO confirms that the AHCA would cut $834 billion in federal Medicaid spending over 10 years. The number of people with Medicaid coverage would drop by 14 million and the coverage for those who remain would be significantly hollowed out. The bill would end Medicaid’s guaranteed federal funding match and replace it with capped funding that will grow slower than state Medicaid costs. Capping and cutting Medicaid will affect every state, whether it expanded coverage under the Affordable Care Act or not. ​By 2026, federal Medicaid spending will be cut by 25 percent. With cuts of that magnitude, every state will be affected.

The AHCA effectively ends the Medicaid expansion in 2020: The CBO also confirms that the Republican claims of a “glide path” for states toward ending the ACA’s Medicaid expansion is a complete myth. It wouldn’t end the expansion immediately, but it would not be the “responsible unwinding” characterized by House Republican committee staff. Over 80% of enrollees and increased federal funding to states would be gone within four years, half gone within the first year of the phase down starting. That would be a shock to many state budgets and economies and leave millions uninsured.

For the 31 states that expanded Medicaid, this will mean big increases in the uninsured and a huge loss in federal funding. A study of the economic and employment impact of ending the Medicaid expansion found that federal legislation ending the expansion in 2019 would result in more than 1.1 million jobs lost by 2023 and more than $1 trillion in lost business output across multiple sectors of state economies. Because expansion funds would dry up rapidly, states would likewise feel the economic effects rapidly. While states that expanded Medicaid would be hit hardest, because commerce spans across states, all states would be hurt to some extent.

All eyes turn to the Senate

The health care debate now turns to the Senate, where 13 GOP Senators are currently developing a plan in secret to repeal and replace the ACA. The Senate must reject the unprecedented path taken by the House GOP and commit to an open, public debate about the future of health care. They must pledge that any health care proposals would meet the Kimmel test: that “No family should be denied medical care, emergency or otherwise, because they can’t afford it.” Passing that test will mean a bill that does not cause a loss in coverage, increase premiums or out-of-pocket costs, erode protections for people with pre-existing conditions, or cut funding from the Medicaid program.