The Centers for Medicare and Medicaid Services (CMS) recently proposed significant cutbacks to federal funding for states implementing the ACA’s Basic Health Program (BHP) option. Minnesota and New York have used this option to provide their residents with substantially more affordable coverage. Under BHP, a state can provide residents up to 200 percent of the federal poverty level (FPL) with insurance that has lower deductibles and premiums than would be charged for private insurance in a health insurance marketplace. For each BHP enrollee, the state receives federal funding equal to 95 percent of the federal financial assistance the enrollee would have received in the marketplace. For comments about CMS’s funding cutbacks, see the letter crafted by Families USA’s Stan Dorn, Director of the National Center for Coverage Innovation.

Figure 1 shows the importance of BHP, taking advantage of a natural experiment that has unfolded in New York. That state did not implement BHP until 2016, after two years of operating a more standard version of ACA coverage. This enables a comparison between changes occurring starting in 2016 for

• Consumers between 139 and 200 percent of FPL, who moved from standard ACA coverage to BHP,;

• Consumers between 200 and 400 percent of FPL, who retained access to ACA coverage with standard levels of federal financial assistance; and

• Consumers above 400 percent of FPL, who retained access to ACA coverage without federal financial assistance.

Consumers enrolled in BHP obtained coverage with premiums of $20 a month or less, without any deductibles. Given these substantial improvements in affordability, enrollment in BHP boomed, even as enrollment in the natural experiment’s comparison groups remained essentially flat. 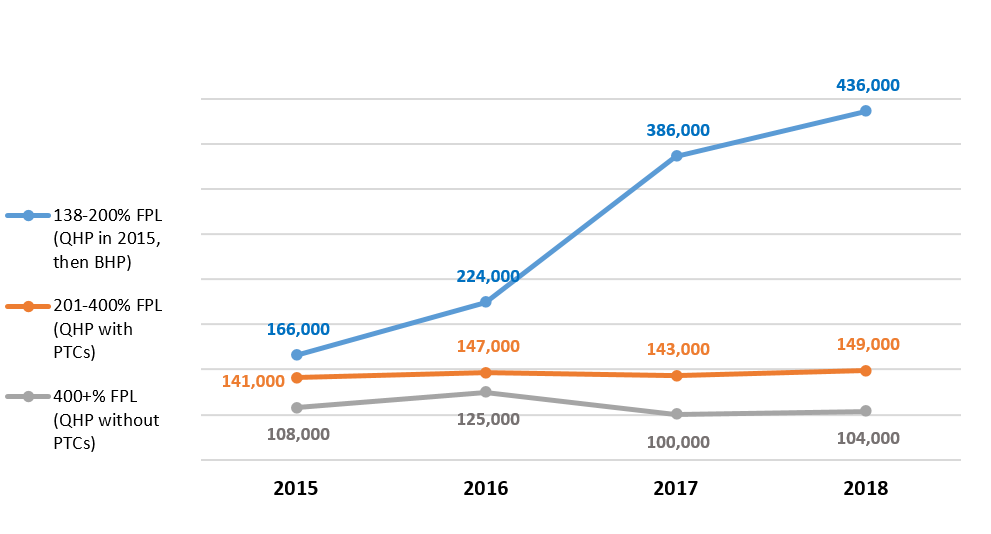