Impact of Section 115 Waiver Series: As part of their Medicaid expansion programs, states can ask the Centers for Medicare and Medicaid Services (CMS) to waive certain requirements. States can submit a Section 1115 waiver, which is intended to let states test new benefit designs and new approaches for delivering health care—so long as they promote the objectives of the Medicaid program and don’t cost the federal government extra money. Unfortunately, many conservative states are trying to use the Section 1115 waiver process to impose ideologically driven requirements and restrictions on people in the Medicaid expansion program. These efforts have hurt patients and wound up costing the states money.

This is the first in a series of analyses that examines the impact of these efforts by conservative states using data that states report to CMS. First up: How charging Medicaid patients premiums hurts their care and state budgets. 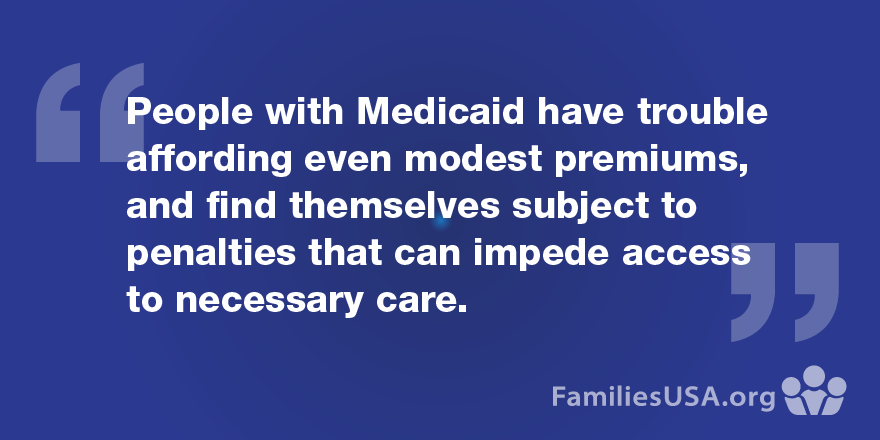 Five of those states— Michigan, Indiana, Iowa, Arkansas, and Montana—currently impose monthly fees on people in their Medicaid expansion program. Through a waiver pending with CMS, Arizona is requesting to charge premiums to people enrolled in the current expansion program. And Ohio and Kentucky will likely follow suit in the next year.

But extensive research has linked the imposition of premiums on people who enroll in Medicaid and CHIP to disruptions in people’s health coverage and higher administrative costs for the state.

People with Medicaid have trouble affording even modest premiums, and find themselves subject to penalties that can impede access to necessary care.

While premium payment policies vary across states, a few themes have emerged.

In Michigan, for example, 40 percent of people who are required to pay premiums are currently past due on payments. As of September 2015—one year after the state expanded Medicaid—2,600 people had accrued a collectable debt to the state for three months or more of past due premiums.

In Iowa, during December 2015, 5,760 people were sent to collections for failure to pay premiums within a 90-day grace period. Another 500 were disenrolled. The prior month, 3,520 people were disenrolled.  These are significant numbers, when taking into account that the number of enrollees subject to premiums hovers at around 17,000 in any given month.

Indiana has touted very high premium payment rates in its program, known as HIP 2.0, compared to other states. However, a closer look reveals that nearly half of those paying premiums are only paying $1 per month. According to anecdotal evidence from a state advocate familiar with the program, HIP 2.0 enrollees seem to be able to make $1 per month payments, but higher premiums are proving unaffordable.

Notably, Indiana’s approved waiver included a “lock-out” provision. Under a lock-out, people with incomes above the federal poverty line who miss two consecutive months of premium payments are disenrolled without the option to re-enroll for six months. The state delayed implementation of this lock-out penalty, and has not yet publicly reported data on how many people have been locked out of coverage to date.

Conservative lawmakers may like the idea of charging people Medicaid premiums but the practical effect is to ultimately drive low-income people into debt and/or make coverage more difficult for them to maintain.

Support for premiums among conservative lawmakers is sometimes based on the mistaken assumption that premiums will generate revenue for their state. On the contrary, across states that have expanded Medicaid through an 1115 waiver, administrative costs are adding up. And premium contributions collected come nowhere close to covering the administrative expenses of maintaining these complex programs.

The data we have so far is just a first glimpse of the impact these premiums have on people in state Medicaid expansion programs. The state reports to CMS look at a single point in time, which has certain limitations when trying to track the enrollment status of an individual over a number of months.

Nevertheless, these data provide a telling first look, and clearly reinforce prior data on the impact that premiums have on low-income enrollees’ ability to maintain coverage. We look forward to federal evaluations that will synthesize premium payment data over time and across states. Those federal evaluations should begin coming out in the next few months.