Washington, D.C. – The Coalition for Fair Drug Prices released the following statement regarding the prescription drug bill introduced September 19 by Chairman Frank Pallone, Chairman Richard Neal, and Chairman Bobby Scott. The coalition—which launched in March—consists of organizations (see list below) representing health care consumers, labor unions and health care providers. They are united around a collective desire to hold policymakers accountable for reining in high and rising prescription drug prices that are detrimental to consumers’ health and financial well-being.

H.R. 3 is a bold and long-overdue step forward in lowering prescription drug prices in America and achieving the principles of the Coalition for Fair Drug Prices.

For the first time, Medicare would be able to negotiate for lower prices on drugs that are bankrupting America’s families. Importantly, H.R. 3 ensures that these lower prices apply to coverage outside of Medicare. The bill also limits the ability of drug companies to raise their prices year after year.

Members of the coalition applaud the Energy and Commerce Committee and the Education and Labor Committee for incorporating amendments recommended by the Coalition for Fair Drug prices that further strengthen and align the bill with the Coalition’s principles. These amendments extend the protection from price spikes to people with group health insurance, strengthen the bill’s launch price provisions, and ensure that drugs have at least two generic or biosimilar competitors before they are no longer required to be sold at the negotiated price. If enacted, H.R. 3 would help improve access to affordable medicines for millions of people. We encourage Congress to expand the benefits of H.R. 3 by including more drugs and allowing uninsured individuals to take advantage of lower-priced drugs.

We urge Members to maintain this momentum during the remaining mark up, and we call on the full House of Representatives to pass legislation that protects all people in this country from high and rising drug prices.

“Enough is enough. This landmark legislation combats the abuses of so many in the pharmaceutical industry, who are putting obscene profits before the health of our nation’s families,” said Frederick Isasi, Executive Director of Families USA. “Congress created this problem by giving drug companies the ability to charge whatever they can get away with. By passing this law, H.R. 3, Congress finally would allow the government to fight for our nation’s families and negotiate directly with drug companies. These policies are supported by a majority of people—Republicans, Independents, and Democrats. Speaker Pelosi and House Democrats are leading this effort. We call on all Members of Congress and President Trump to say “no” to the pharmaceutical lobbyists and vote “yes” and sign into law this critically important legislation.” 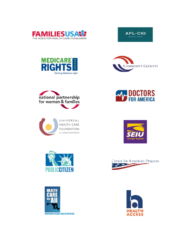