Senate Republicans Produce Same Results as the House ACA Repeal Bill: Tax Cuts for the Rich and Corporations Paid for by Reducing Health Care for Millions of Americans

Washington, D.C. – After weeks of secrecy, Republican leadership in the Senate has presented a discussion draft of their Affordable Care Act (ACA) repeal bill that shows the ultimate bill is likely to be as bad as, if not worse than, the bill narrowly passed by the House. Like the House bill that was roundly criticized, the Senate proposal would likely deny health care to millions of people, cut Medicaid by hundreds of billions of dollars, jeopardize health coverage for millions of families and drive up costs for millions more, while giving enormous tax cuts to wealthy individuals and corporations.

The bill eliminates Medicaid’s guarantee of protection to the most vulnerable by imposing draconian funding caps and cuts that go even deeper over time than the House bill does. The bill guts protections for people with pre-existing conditions and for women planning to have children, allowing states to opt out of ACA protections that prohibit insurers from excluding coverage for pre-existing conditions and maternity care.

Following is the statement of Craig Obey, Deputy Executive Director of Families USA:

“Republicans should be ashamed. After insisting they would do better than the House of Representatives, they have proposed a repeal plan that is more harmful and equally heartless. This disastrous bill, ironically called ‘Better Care,’ does not make health care better for our kids and families; it does the opposite. The supposed improvements it makes on the House Bill are cosmetic, while the deeper cuts to Medicaid it puts in place are dramatic and all-too-real.  It will bleed Medicaid increasingly dry, year after year, leaving our children, seniors, and people with disabilities at ever-increasing risk.  And it will deny health care to countless people when they need it most, all to provide a tax cut to wealthy individuals and corporations who do not need it.

“There is still time for Senators to come to their senses and leave a legacy they will be proud of, rather than the stain this bill will undoubtedly leave on history. This bill is not what America is about and Senators should know better.

“Do not be misled by false comparisons between the Senate and the House bill.  The real comparison should be made with the health care people receive now and are guaranteed in the future under current law.  Compared to that benchmark, this proposal is an abysmal failure.” 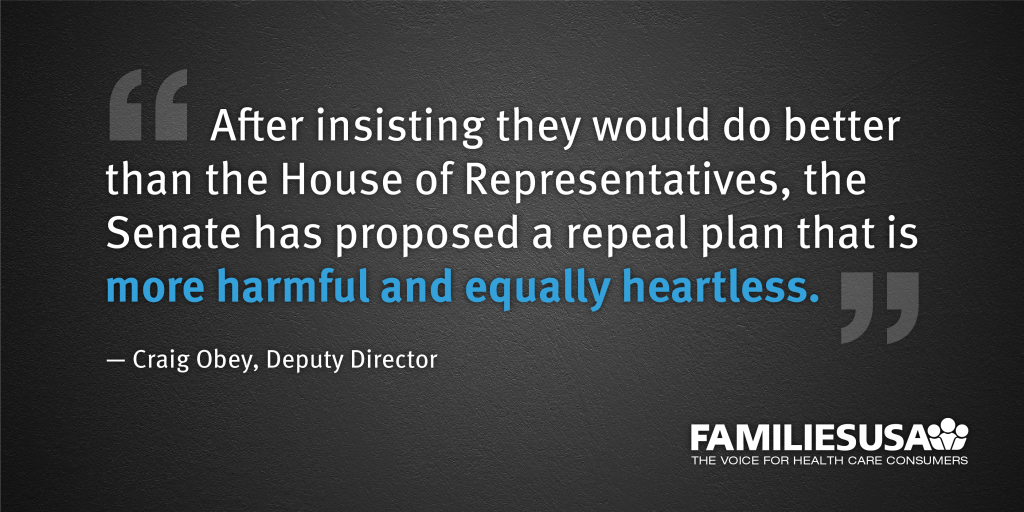