Washington, D.C., September 26, 2019 – Today, 14 organizations (see list below) representing consumers, patients and workers formally launched No Surprises: People Against Unfair Medical Bills during a media briefing on Capitol Hill. This new, national campaign’s goal is to get Congress to pass surprise bill legislation before the end of the year. The campaign was created out of an urgent need for broad federal policies that will fully protect consumers from surprise out-of-network bills and contain health care costs.

Surprise medical bills are incredibly common, and can have devastating impact on the financial security of our nation’s families. These egregious billing practices are part of a systemic problem that places patients in the middle of a tug-of-war between health care providers and insurers over the price of services. To ensure that Congress adopts meaningful reforms to end these abuses practices, the campaign has outlined three key principles that will guide its efforts. Legislation enacted this year must:

Immediately, the campaign will engage with lawmakers and activate broad grassroots networks to hold Congress accountable for passing surprise bill legislation. The campaign also will focus on bringing forward the real-world harm that surprise medical bills causes to our nation through the personal stories of people like Sonji Wilkes, who shared her experience with surprise billing during the briefing.

Wilkes received an astounding $50,000 surprise medical bill after her newborn son was treated for hemophilia in a Neonatal Intensive Care Unit that was just steps from the room in which she delivered him. Wilkes and her husband were unaware that the hospital had subcontracted the NICU to a third-party provider that was not a part of any insurance company network.

“I’m excited to welcome the No Surprises coalition to our collective effort to end unfair surprise medical bills. No Surprises will play a key role in standing up for consumers at a time when dark money forces are spending millions attempting to prevent Congress from passing legislation to protect consumers from devastating surprise medical bills. Americans can rest easier today knowing the consumer cavalry is here. Thank you for joining in the fight to create a fairer system for patients,” said Rep. Pallone.

“Surprise medical bills continue to devastate families financially and emotionally despite our families making every effort to avoid them,” said Isasi. “People being charged for out-of-network care after paying health care premiums month and after month and doing their very best to understand their health insurance networks is unconscionable and underscores that our health care system is deeply flawed. We have launched this campaign to call on Congress to take immediate action. Families deserve to rest easy, to know that health insurance is real and that it will allow them to seek the care they need, without going bankrupt or losing their homes in the process.”

“Thousands of our members have shared heart-wrenching stories about the financial pain and emotional stress of surprise medical bills,” said Bell. “The charges are staggering — $2,000, 5,000, even $50,000 or more. These are people who’ve done everything they reasonably can to stay in their health plan network to avoid additional costs, and they still get hit with huge surprise bills. We strongly agree that Congress should pass a comprehensive, bipartisan bill that bans all surprise balance billing for emergency and non-emergency care. To avoid driving up insurance premiums, the bill should establish reasonable payment levels for resolving surprise bills that contain total costs for patients.”

And AFSCME President Lee Saunders added, “It is time to end the shameful practice of surprise medical billing. By standing together and reining in predatory firms that swindle people in their most urgent time of need, we can prevent the extreme and unnecessary financial burden families face when they seek emergency care. As a campaign, we will fight back and advocate for lower health care costs so that working families can have access to the care they need and deserve without going into financial ruin.” 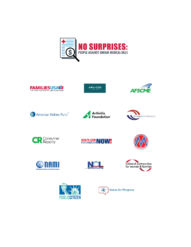