Washington, D.C., November 13, 2019 – Nearly 9 in 10 voters support legislation to protect patients from surprise out-of-network medical bills and nearly 80% said that when they received such a bill they struggled to pay it. Released yesterday, those findings represent results from a national poll on consumer sentiments about surprise medical bills.

Families USA sponsored the poll, which asked voters about their experiences with surprise medical bills and feelings about legislation to protect consumers from these bills. Surprise medical bills occur when people are charged for care from out-of-network providers or facilities they receive due to no fault of their own. These bills can amount to hundreds, thousands, or even tens-of-thousands of dollars.

The poll, which was conducted in the last few weeks, also found that:

“That’s really not what you’re thinking about when you’re having life-threatening symptoms, like ‘hmm, I wonder which of these hospitals might be in my network.'” Nicki Pogue, a consumer from San Francisco, CA, recalling her reaction after she received a surprise medical bill from an out-of-network hospital.

“This poll underscores the real fear families have about a current, past or future surprise medical bill,” said Frederick Isasi, Families USA’s executive director. “It is not remarkable that nearly 90% of voters want Congress to pass legislation to protect them from receiving a surprise medical bill. The fact that most of them feel powerless and say they need Congress to act should be the fuel that gets elected officials to take immediate action and stop this financial hemorrhaging that is damaging consumers’ livelihoods — in many instances, preventing them from seeking the care they need and deserve.” 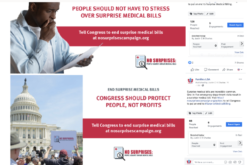